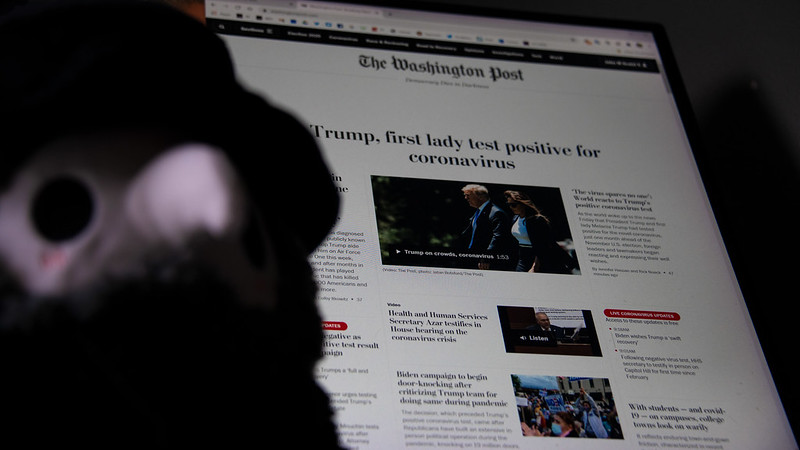 There is of course irony, of the cheap, Alanis Morissette sort, of a man so heavily invested in denying the reality and severity of the COVID-19 virus contracting the thing and joining the millions of his fellow Americans who have suffered from it, and risking becoming one of the more than 200,000 who have died from it. It does not escape notice that, like many if not most of those, the president might not have had to suffer this particular calamity if the federal government had not had a shambolic response to the virus, in no small part due to Trump himself being the largest vector of disinformation about it. And of course, the fact that Trump has repeatedly disdained wearing face masks as a protective measure, and repeatedly mocked and criticized Joe Biden for doing so, up to and including at this week’s debate, certainly adds a mordant bite to his diagnosis.

No one deserves to contract a virus which can damage multiple organs, cause lungs to malfunction, require its victims to be hooked up to respirators to keep their bodies alive, and force people to die alone, away from the touch and comfort of family and loved ones, not even a man, who, when confronted with the deaths the virus and his policies regarding it wrought, merely said “It is what it is.” But it’s possible some people might find they have less sympathy for a man who so heavily politicized the national response to this disease, and actively prioritized his own re-election strategy over helping contain the spread of the virus, than they might have for others.

All of this is true. But for me, this is a reminder of a thing that has been true from the beginning, regardless of how much so many, including and indeed primarily Trump himself, thought and wished it otherwise: The virus doesn’t care about your politics. It doesn’t care about your party affiliation, whether you believe in God or not, what your opinions are about science or vaccines, your feelings about what is “masculine” or “alpha” behavior, or whether you think it’s an intrusion on your rights to be told what to put on your face or how to act in a retail establishment, or a school, or anywhere else. It doesn’t care about anything. The only thing it wants is to make more of itself — and it will, when offered the opportunity.

Trump, through his actions, and inaction, has offered the virus that opportunity, over and over again. He’s now done it personally, offering up his own body to its tender predations — and if that was the extent of it, then that would simply be his own karma. Trump is like a man who sees a sign warning against alligators lurking in a swamp as a dare to take a swim, and when the alligators spin him under the water, no one could say he wasn’t warned. Unfortunately, he hasn’t confined his heedlessness to himself. How dare this sign tell us where we can and can’t swim, it’s a liberal plot to take our freedoms! And then suddenly legions are splashing into the swamp, dragging unwilling others with them, to be a feast for the creatures that dwell there. And Trump, chest high in the swampy water, chortles to himself that the signmakers will be blamed for it all, even as the alligators close in on him.

The president is 74 years old and very obviously in less-than-great physical and mental shape; it seems likely he has some of the various comorbidities that exacerbate the severity of the virus. He is fortunate that thanks to his position, he will receive a level of health care that his administration is currently trying to strip from millions of other Americans. For this reason among others, I think it’s possible, indeed, probable, he’ll get through this diagnosis just fine, unlike so many others of his general age and infirmity.

If and when he does, it will be interesting to see how he reacts to having contracted the virus. One would like to hope that it causes him to reassess his previous positions and actions, but I think we all know it won’t. If Trump has a mild case and bounces back, it’ll just be proof to him that he was right all along, and off he’ll go, telling people to come on in, the swamp water’s fine. And in they will go.

It would be karmically disadvantageous to wish on Trump a level of viral severity that makes it sink in, even to him, how bad this disease can get, and how foolish he has been to deny it, as it burned through the country, taking hundreds of thousands with it, and obliging countless more to deal with chronic health issues springing from having contracted it. Rather, I wish him a full and quick recovery, and that with the recovery comes wisdom, knowledge, and a desire to help his fellow Americans — all of them, not just the ones he think might be useful to him.

I acknowledge the latter parts of that are the very definition of wishful thinking. But if they came true despite my doubts, well. That would be ironic.

This month, I did something I once thought I would never do.

My whole adult life, I have been what’s known as a “no party preference” or NPP voter. (Sometimes called “independent”, but this is ambiguous as there is a party called the American Independent Party, and they are very much not centrist or big-tent.)

Largely this has been because I don’t like political parties. And I still don’t. In theory, they’re money and resource pools for candidates to draw on; in practice, we often see them working against insurgent candidates who are proposing change. I’d much rather have campaign finance restricted to some equal share of a publicly-funded pool, with strict laws and even stricter enforcement. (Yes, I know there are risks there, too. There are no perfect solutions.)

I also have always held a somewhat idealistic openness toward third parties, largely as a result of all of the shitty things that politicians of both major parties and the parties themselves have done—some credible competition might help keep them honest.

On top of the significant difference between the two major parties these days, there is also some realpolitik involved.

For one, I’ve accepted the fact that as long as we have a first-past-the-post voting system, our elections will always tend toward two polar parties, with all the other parties and all the candidates and voters arrayed around them like iron filings around a bar magnet. Ranked-choice voting is a prerequisite (but not the only step by any means) to dismantling the two-party binary. And until we get there, power resides with the two major parties and power must be won and wielded to make change.

But more immediately, the current election in California, which started this month and ends March 3rd, is not only a primary—it’s also used by various Democratic Central Committees (county party organizations, basically) to elect their board members.

But a NPP voter cannot vote in their county’s DCCC election. That’s for registered Democrats only.

So that’s what pushed me over the edge. In San Francisco, we have two roughly-defined slates of candidates running, one formed of current and former elected officials looking to transition from holding power in state or City government to holding power in the county Party, and the other a slate of activists who want the Party to drive progressive change.

One of those Democratic Parties sounds a lot better to me—and I want to cast my vote accordingly.

As I mentioned, the election has already begun—I had already received my crossover ballot when I made the decision. I emailed the SF Department of Elections and got confirmation that once I re-register (and check the box to receive mail-in ballots, same as I did last time), a new ballot would automatically be sent to me. So I did the thing, got my new ballot, and will discard my crossover ballot.

(If you want to do this, the deadline to register and get a Democratic mail-in ballot was February 18 here in California, but you can do Conditional Voter Registration at any polling place/voting center in your county. If you’re in another state, check with your Secretary of State or county Department of Elections.)

Trump’s quest for revenge could mean the end of whistleblowing - The Washington Post
Saturday February 8th, 2020 at 3:43 PM

SteveRB511
reply
I don't think that this is an end to whistleblowing. This is something that should not be easy to do or without potential cost, otherwise we get into too many frivolous accusations. Having said that, one has to admire the courage it took for these people to stand against a highly corrupt presidency.

U.S. adults are more likely to say that “made-up news/info” is a big problem than they are to identify climate change, racism, terrorism, or sexism as such, according to a study out from the Pew Research Center Wednesday: Fifty percent of those surveyed said made-up news (the artist formerly known as “fake news”) is a “very big problem” in the United States. By comparison, 46 percent called climate change a “very big problem”; 40 percent said the same about racism; 34 percent said the same about terrorism. “Made-up news/info” can’t touch some other issues, though — like drug addiction and affordable health care. It ranks only a hair behind income inequality.

The report is the bleakest I’ve seen when it comes to the partisan divide in the United States around fake news. Republicans are much more likely than Democrats to identify made-up news as a “very big problem.” (They are, after all, told it’s a huge problem repeatedly by the president.) They are also more likely to say that they see it “often,” and they are three times as likely as Democrats to blame journalists for creating it. Republicans are also more likely to say that they have “reduced the amount of news they get overall” out of their concerns over fake news.

Here, for instance, are Americans overall: And here are Republicans: Seventy-nine percent of Americans think “steps should be taken to restrict made-up news and information intended to mislead” — a statistic that is frightening for journalists considering that Republicans are more likely to think fake news is a big problem and to blame journalists for it, and when you consider that some of the harshest “fake news” bans have come from countries with authoritarian governments where the bans can be seen as clamping down on journalism and free speech. Pew didn’t ask, in this survey, precisely what measures Americans think should be taken to reduce fake news — but 53 percent of survey respondents said the greatest responsibility comes from “the news media,” compared to only 9 percent who said the same about tech companies. In addition to the political divide, Pew identified other demographic differences in Americans’ concerns about fake news. 18- to 29-year-olds are less concerned about fake news than those ages 50 and older, are less likely to say they encounter it often, and are less likely to blame journalists for it. In fact, “the only group that the youngest adults put somewhat greater blame on is the public (30% vs. 23% of the oldest age group).” 18- to 29-year-olds are also more likely than older age groups “to have taken certain steps to combat [fake news] or to limit their exposure to it.” The full report is here.

1 Comment
After Helsinki, Trump isn’t as useful to Putin as one might think.
Read the whole story

SteveRB511
reply
Pretty much sums it up...

The White House has eliminated the cybersecurity coordinator position.

With collusion investigations, Russian hacking, emails, etc., why would the white House want cybersecurity people keeping an eye on things? ;)